You really need to know fixed point complementary math for this one. Now time for a trig overview. In the 'real' world, we have 360 degrees of rotation, and the results of sin and cos of any angle fall in the range of -1 to 1. Now this works a little differently on the SNES, at least the way I ended up doing it.

In the SNES world, we are going to represent the fractional values that range from -1 to +1 as -127 to +127. Also, instead of going through 360 values for 360 degrees we are going to cycle through 256 values that represent 360 degrees of rotation. Why? Because we need to have a way of representing positive and negative fractional values and if we cycle through only 256 values we can use just 1 byte to do the cycling. Moreover, The complementary math registers we'll be using to do the calculations need 1 of the multiplicands to be only a byte in size. So now we can multiply our scaling factors by an angle and do both scaling & rotation!

Now we're left with the question, how are we going to obtain a table of 256 values that represents sin and cos results from -127 to +127? I found a program called RollerCoaster, made by Pan. It's Windows only :(, but that's what we have virtualization for now :D. Mac or Linux will need virtualization. Anyhow, grab RollerCoaster.7z. Now take a look below: 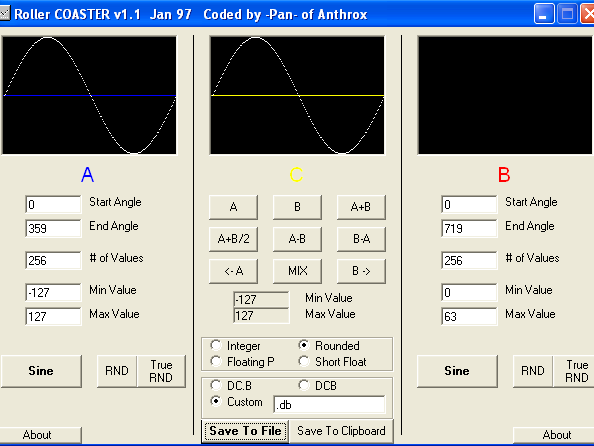 Enter in all the values listed under A, then in the middle column labeled C, press the A button. This will copy our A sinusoid into C, which is used for output into a lookup table. Lastly, make sure the 'rounded' bullet is selected as well as the 'Custom' bullet. Specify '.db' as the custom manner to define bytes in the lookup table. We do this of course because WLA uses the .db directive to define bytes. Now click 'Save To File' and name it 'sincos.inc'.

Now you need to learn how to do signed complementary math on the SNES. Multiple registers are used. It basically multiplies a number 16-bits wide by an 8-bit wide number, and the result can be anywhere from 8-24 bits in size. Let me show you the registers for the multiplicands:

Note: Rotation is counter-clockwise. For clockwise rotation, you need to put a -sin in C and +sin in B.

VBlank is the only good time to use the multiplication registers since $211b-$211c are being used for the Mode7 matrix parameters at any other time. Here's how to perform the calculations during vblank: